Victory for Miguna as the government allows his trip to Kenya

Sonia Martinez November 30, 2021 Kenya Comments Off on Victory for Miguna as the government allows his trip to Kenya 53 Views

The confrontation between exiled lawyer Miguna Miguna and the government is far from over after the state threw him back to the Kenyan embassies in Ottawa, Canada and Berlin, Germany.

In a letter signed by Attorney General Kennedy Ogeto, the government asked the Kenyan High Commissioners in Ottawa and Berlin to facilitate Miguna’s journey by providing him with the necessary travel documents upon presentation of the necessary documents.

Miguna, who was traveling to Kenya on Tuesday November 16, was stranded in Berlin after the country’s national airline, Lufthansa, refused to fly him to Kenya because of red warnings from the government.

The outspoken attorney then went to seek approval from the Kenyan embassy in Berlin, but his request to travel to Nairobi was denied despite a court order ordering the government to allow him entry.

In his letter to the President of the Law Society of Kenya (LSK), Nelson Havi, the attorney general noted that the government had given the embassies specific instructions to clear Miguna for travel.

â€œAfter receiving a court order from Lady Justice Hedwig Ong’udi on November 22, 2021, we advised the Ministry of the Interior and the coordination of the national government and the Ministry of Foreign Affairs and have since received confirmation that the Ministry of Immigration has the immigration authorities in Berlin and Ottawa instructed to issue Miguna Miguna with the travel documents after submitting the necessary forms, â€the letter reads in extracts.

However, the attorney general did not confirm the date the government received the confirmation from the State Department of Immigration, which issued the orders to the Kenyan embassies in Germany and Canada.

The attorney general’s letter of Monday, November 29, comes barely a week after Miguna alleged that the Kenyan immigration authorities in Berlin refused to hear him despite existing court orders. 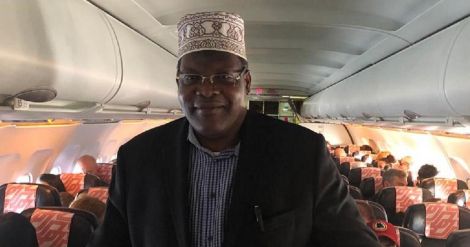 Controversial lawyer Miguna Miguna on board a plane in Germany on January 7, 2020 that was flying to Nairobi

â€œI found three employees at the Kenyan Embassy – Alexander Karuma, Emma Malinda and Esther Mungai – who showed so much hatred and contempt for court orders towards me that they would be mistakenly assumed to be theirs, while Amb. Tom Amolo is a disgrace and a man without a backbone, â€said Miguna Miguna on November 23, after the Kenyan embassy in Berlin refused to grant her permission.

Miguna was forcibly evicted from the country in 2018 after accused of not being a Kenyan citizen. The lawyer who swore in Raila Odinga as People’s President was accused of having resided illegally in the country despite his Canadian citizenship.

He has attempted to return to the country on several occasions but has faced harsh conditions, including deportation on landing at Jomo Kenyatta International Airport (JKIA).