In a post on his social media on Friday, February 11, Governor Oparanya denied the allegations and urged his supporters to remain calm amid speculation he is about to join the United Democratic Alliance (UDA).

Governor Oparanya explained that the allegations are malicious and being circulated by his political enemies, who are uncomfortable with the new Azimio La Umoja wave sweeping the country.

“I urge Azimio supporters to ignore the propaganda spread by my critics, who are uncomfortable with the Azimio wave sweeping the country, and my company is behind Baba’s candidacy for the presidency,” the governor said.

His views were shared by the ODM party, which dismissed reports of Oparanya’s withdrawal to the Kenyan Kwanza side.

ODM pointed out that while Oparanya was absent from the campaign rallies led by Mombasa Governor Hassan Joho, he held meetings with other Azimio La Umoja leaders.

The party said Oparamya will not leave the Azimio movement as it is speculated by her political rivals.

“The Vice Party Chairman, Governor Oparanya, is a member of the Raila Campaign Committee chaired by Laikipia County Governor HE Nderitu Mureithi.

“The board met all afternoon and Governor Oparanya was present. Ignore rumors spread by busybodies who have run out of ideas,” ODM’s statement said in part.

The response from ODM and Governor Oparanya comes amid allegations that the Kakamega governor was planning to leave Azimio La Umoja and join DP Ruto’s camp. 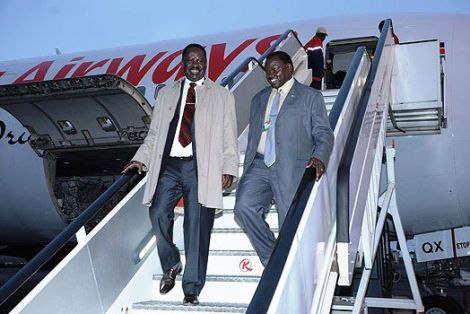 Joho had led leaders allied with Azimio La Umoja in the campaign for Odinga, located in the western region out of the country on Thursday, February 10, 2022.

Raila left the country last week to attend the 35th African Union Summit in Addis Ababa, Ethiopia on February 5-6 before heading to India.