NMS works with Kenya Railways to carry passengers in the CBD

Sonia Martinez March 23, 2022 Kenya Comments Off on NMS works with Kenya Railways to carry passengers in the CBD 39 Views

NMS announced on Wednesday March 23 that Kenya Railways will be offering a number of its buses to carry pedestrians from various sections of the CBD to the Green Park bus terminal.

The buses will bridge the gap between the terminals and CBD streets in what is commonly known as last mile connectivity.

Priority is given to vulnerable groups such as expectant mothers and people with disabilities.

Green Park Terminus at the Old Railways Club in Nairobi

“Kenya Railways buses will carry passengers between the CBD and the Green Park Bus Terminal. Priority groups, including older people, people with disabilities (PWDs) and expectant mothers, must be prioritized,” the statement said, in part.

Buses are available from designated locations within the CBD. NMS and Kenya Railways will issue further communications on whether passengers will pay for transport.

NMS’s announcement comes amid complaints from Nairobi residents who protested having to travel long distances to and from the bus terminal next to Uhuru Park during previous test runs.

The agency said the Green Park terminus, which was set up to ease congestion in the city, is nearing completion and scheduled to open soon.

It also issued rules and regulations for passengers and matatus. Passenger pickup and drop-off is only at designated berths.

Passenger transport vehicles (PSVs) must strictly adhere to the berths, which are marked according to the routes.

“No passenger pickup or drop-off at non-designated locations, including the entire section of exit road,” NMS announced. 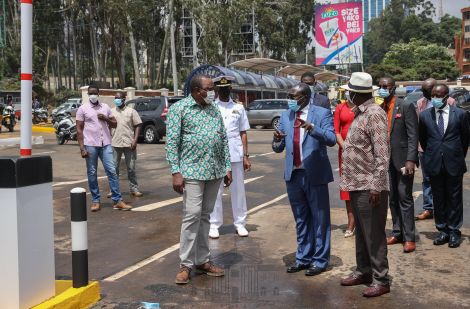 In addition, access to the terminal was limited to three matatus per SACCO, with time limited to 20 minutes per vehicle. Staff wear uniforms and insignia on duty.

In particular, express vehicles may be exempted from the queue upon approval by management. To ensure full compliance, two officers will be deployed at each terminal to assist with operations.