The air force usually shows their skills in aerial combat at national events and also informs the country about the various types of aircraft that are available to them for guarding the airspace of the country.

The ad is more often accompanied by a description by senior military officials detailing the aircraft. This action of pulling such stunts is known as Overflight, a term coined in the United Kingdom and other Commonwealth countries, including Kenya.

Sometimes this Overflight appear in special situations in the country to honor top personalities or to celebrate certain types of aircraft with the direct approval of the President, the commander in chief of the armed forces.

The Kenyan Air Force performs stunts during the national event

They are used to show respect, show airplanes, demonstrate flying skills and as a form of entertainment to please the public, for example on Jamhuri Day, which is celebrated on December 12th.

These flight skills reflect milestones in national life, ranging from personal to communal and local to military and national.

In Kenya, the Kenyan Air Force soldiers undergo intensive training before they reach the flight time. The training usually takes place at the Flying Training School (FTS) on the Laikipia Air Base (LAB).

Moi Air Base in Eastleigh, Nairobi, is the headquarters with further bases in the Forward Operating Base (FOB) Mombasa (Moi International Airport), FOB Mandera, FOB Wajir and FOB Nyeri.

FTS graduates include pilot officers trained in fixed-wing, helicopter, and combat aircraft. During their training, the officers achieve the necessary flight hours to become KAF pilots and receive the pilot’s certification.

Candidates for Air Force pilots, pilots for remote-controlled aircraft, and officers for combat systems are first guided through an initial flight screening. This first step is essential as it helps assess fitness to fly and introduce them to the rigors of military aviation and training.

After this first step, candidates will be fully introduced to the training by receiving theoretical and practical instruction given by trained soldiers among other professionals in the aviation industry.

The Kenya Air Force (KAF) Commander Maj. Gen. John Omenda is the one overseeing the entire process of imparting knowledge to the select few selected to join this highly effective unit.

The most important lessons in the first few training units include mastery of contact, instrument, low-level and formation flying. The soldiers then move to acquire the skills necessary to become fighter pilots.

In Kenya, instruction for the Kenyan Air Force soldiers includes flight training that teaches them basic techniques in operating modern aircraft, ground training that is usually physical and intense, and then leadership skills as the role requires very important decisions.

The Flying Training School at Laikipia Air Base (LAB) provides a foundation on which graduates of the various tests receive military scholarships to improve their skills.

The military aircraft for which they are trained include the F-5E / F Tiger II combat aircraft, a dozen Tucano trainers, a dozen Y-12 transport aircraft, half a dozen G120A base trainers, several dozen MD500 helicopters.

The various types of military aircraft, along with the helicopters of the Army’s 50th Air Cavalry, are piloted by the Joint Helicopter Command based in the Embakasi Garrison.

In 1982 the Air Force was charged with planning a coup to overthrow the government of the late President Daniel Moi. This time it was under Commandant Hezekiah Ochuka. It was dissolved by Moi but regained its independence in 1994.

Despite the training sessions, the planes sometimes crashed. In 2006, a KAF Harbin Y-12 crashed near Marsabit with 17 on board, 14 of whom died. Former minister Bonaya Godana was among the victims.

After that, Kenya began acquiring planes even from the United States and other superpower countries. 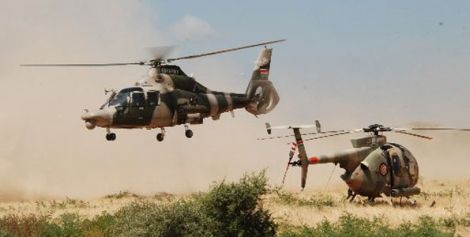