Dr. Swabra Swaleh Briek, a renowned gynecologist, wowed the world when a viral photo of her in the operating room looked after a pregnant woman while her son was on her back.

That was because the nanny had left and she had no other support system.

â€œGovernment hospitals, as we know, have few staff on weekends. My son was crying, do I leave him while I do the operation? â€Said Dr. Briek.

The incident occurred at Kalou District Hospital, Nyandarua County, when she was called for an emergency. A woman in labor had to be delivered urgently by caesarean section.

“At that time, I had a dying woman in my head in front of me, and if I hadn’t been operated on with my son on my back, we would probably have lost her,” says Dr. Briek.

She admitted that her son slept throughout the procedure and the operation was successful.

In memory of the events, Dr. Briek announced that she was sharing the photo with her now 6-year-old son while she was telling him about that historic day.

The gynecologist is currently stationed at the Premier Hospital in Mombasa and claimed that maternal care was subject-specific. For example, she admits that she is a product of a teenage pregnancy.

With this understanding, Dr. Briek states that every pregnancy carries unique risks that range from age, previous illnesses, and so on. 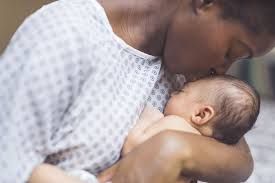 Image of a mother caressing her newborn baby